Peru is South America ‘s third largest country, its 25 million inhabitants approximately and an Area of 1, 285.21 square kilometers, Peru contains some of the most varied geography in South America with three different regions: Coastal desert, Andean Highlands and Jungle area. The main Capital is the Lima City located on the Pacific Coast.
Peru has two official languages: Spanish and Quechua, the language of the Inca Empire, while English is spoken by some people, mostly who dedicate on Tourim activity. Peru has important tourist places for his visitors like Cordillera Blanca , Cordillera Huayhuash , Machupichu in Cusco, Colca Canyon in Arequipa, Floating Islands of Lake Titicaca in Puno, etc, etc. The wheatear on each region is very varied and unstable 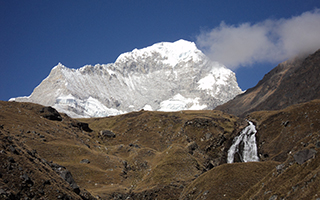 Cordillera de Huayhuash range
The Cordillera Huayhuash is a small, compact and remote mountain range to the south of the Cordillera Blanca.
The trekking and hiking routes make a complete circuit of the range, and offer unequalled close up views of majestic high peaks and glaciers and many large blue trout-filled lakes also here we find the second highest mountain in peru, Yerupaja and siula Grande- the mountain made famous by the Joe Simpson book and movie "Touching The Void"